Governments use a variety of public procurement methods. Over time, many variants have got added to the much vilified LCM (least cost method), and QCBS (quality and cost-based selection) options. Recent creative additions in India include viability gap, reverse e-auctions, and hybrid annuity 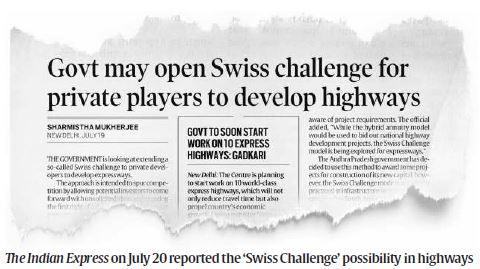 Swiss challenge is a procedure to award contracts , specially for government procurement. In Swiss challenge one person gives details of his idea & amount and government publish it. It’s like a challenge to other people to offer better amount or modification in idea.  Now if someone offer better deal for the same idea or minimum alteration than government ask original bidder to consider for the same. If he doesn’t accept, contract awarded to second party.

What are the advantages?   The obvious advantages are that it cuts red tape and shortens timelines, and promotes enterprise by rewarding the private sector for its ideas. The private sector brings innovation, technology and uniqueness to a project, and an element of competition can be introduced by modifying the Challenge.

And what are the problems?

lack of transparency and competition while dealing with unsolicited proposals. Governments need to have a strong legal and regulatory framework to award projects under the Swiss Challenge method. It can potentially foster crony capitalism, and allow companies space to employ dubious means to bag projects. Given that governments sometimes lack an understanding of risks involved in a project, direct negotiations with private players can be fraught with downsides.

In general, competitive bidding is the best method to get the most value on public-private partnership projects.

Faced with an unsolicited proposal, the government can handle it in two ways:

One, the government can either purchase the intellectual property rights for a project concept from the proponent and then award the project through a competitive bidding process in which no bidder has a pre-defined advantage.

In the Indian context, the Supreme Court has upheld the validity of the Swiss Challenge as a legitimate method of public procurement subject to a series of process safeguards that the lordships have carefully laid out.

Where India adopted this Swiss method?

Indian Railways, with Cabinet sanction, has correctly chosen the Swiss Challenge for getting on speedily with the redevelopment of 400 stations. The Maharashtra Housing and Area Development Authority had used this for a housing project in Thane. The Ministry of Road Transport and Highways is examining this route for some access-controlled expressways. The Jaipur Development Authority is also reported to have announced the Mega Film City venture in this format.

The jury is still out on the success of public-private partnership (PPP) in infra projects. There have been several controversies around large scale PPP projects. Construction costs jumped significantly in the case of the Mumbai Metro. There were serious issues related to the international airport and the Airport Metro line in Delhi. The government has now brought PPP projects under the ambit of the CAG, so there is some scrutiny of projects where significant concessions including land at subsidised rates, real estate space, viability gap funding, etc. are granted by the government.