Recently, India rejected China’s contention that it must sign the NPT to get membership of the Nuclear Suppliers Group, saying France was included in the elite group without signing the Non-Proliferation Treaty.

All you need to know about the issue:

Nuclear Suppliers Group (NSG) is a multinational body concerned with reducing nuclear proliferation by controlling the export and re-transfer of materials that may be applicable to nuclear weapon development and by improving safeguards and protection on existing materials. Interestingly, the NSG was set up in 1974 as a reaction to India’s nuclear tests to stop what it called the misuse of nuclear material meant for peaceful purposes. Currently, it has 48 members.

India sought membership of the NSG in 2008, but its application hasn’t been decided on, primarily because signing the NPT or other nuclear moratoriums on testing is a pre-requisite. However, India has received a special waiver to conduct nuclear trade with all nuclear exporters.

India, Pakistan, Israel and South Sudan are among the four UN member states which have not signed the NPT, the international pact aimed at preventing the spread of nuclear weapons.

China had opposed India’s bid to get NSG membership on the ground that it was yet to sign the NPT. It had said all the multilateral non-proliferation export control regime including the NSG have regarded NPT as an important standard for the expansion of the NSG. And hence, members of the Nuclear Suppliers Group should be party to NPT.

How India defends its move?

It says, the NSG is an ad hoc export control regime and France, which was not an NPT member for some time, was a member of the NSG since it respected NSG’s objectives. Also, the NPT allows civil nuclear cooperation with non-NPT countries.

Why India should be granted NSG membership:

In this game of developing nuclear weapons India has not indulged in any dubious/clandestine activity and its programme has been developed solely by years of hard work indigenously. By this single act India has shown that developing a credible nuclear weapons programme through honest and civilian means is possible for any country having high-level scientific manpower and materials.

Besides, by declaring a voluntary moratorium on further underground nuclear tests India has effectively acted in sense and spirit of NPT/CTBT provisions. By steering its programme only as a minimum deterrence and pledging NFU unless faced with an attack of weapons of mass destruction (WMD), India has established itself as a responsible nuclear state.

Benefits associated with NSG membership- Once admitted, an NSG member state gets:

NSG membership cannot be linked with NPT. But, it can be linked with International Atomic Energy Agency (IAEA). And India has closely cooperated with IAEA. Therefore, India’s case should be judged independently without prejudice or on requests to block it following lobbying from other countries. In 2008, China was among the last few countries to lift its objection to clean waiver by NSG to India. During American President Barack Obama’s visit to India in January 2015, the US had announced that India was ready to join the NSG. This position was reiterated by the US recently.

India’s nuclear doctrine is non-proliferation-oriented and is both sensible and responsible. Having accepted IAEA safeguards and Additional Protocol and having effectively subscribed to and practised the principles of non-proliferation, it is immaterial if India has formally signed the NPT, CTBT or any other such treaty. India has already acquired high-level expertise in the peaceful use of nuclear energy in industry, power, agriculture and health care. India’s membership of the NSG shall not only benefit it but also encourage civil nuclear trade globally without compromising on world peace and harmony. 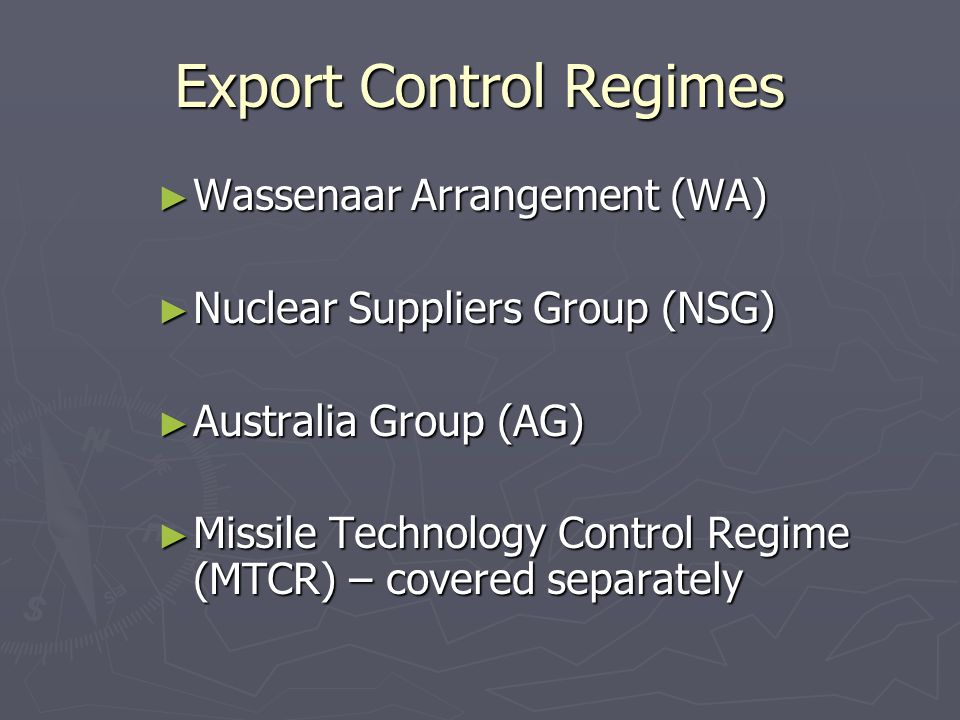 MTCR was established in 1987 by the G7 countries and aims to limit the proliferation of missile and other unmanned delivery systems that could be used for chemical or nuclear attacks. It is an involuntary partnership between 34 countries which urge each other to restrict their missle export and technologies capable of carrying a 500-kilogram payload a minimum of 300 kilometres.

India formally applied for a MTCR membership in June 2015 which was eventually blocked by Italy in protest of India’a arrest of two Italian marines suspected of shooting an Indian fisherman. The membership would have immensely helped India in getting access to to world-class technology, according to a report by The Economic Times. It would have also allowed India to export its own technology to countries that comply with MTCR.

The NSG is a group of nuclear suppliers countries which promote non-proliferation of nuclear weapons. It attempts to control the exports and re-transfer of materials applicable to nuclear weapon development. It was founded in 1974 as to response to India’s ‘Smiling Buddha’. Countries already part of the Nuclear Non-Proliferation Treaty (NPT) saw the need to further limit the export of nuclear equipment.

India’s attempt to joining the NSG was blocked by several nations who considered signing of the NPT as an important standard for the NSG’s expansion. President Barack Obama, however, reaffirmed that US believes India meets the missile technology control regime and is ready for NSG.

Wassenaar Arrangement was established to contribute to regional and international security and stability. It aims to promote transparency and greater responsibility in transfer of conventional arms and dual-use goods and technologies. It has 41 member states and was established in 1996 as an extension of Coordination committee for Multilateral export Controls (COCOM). The participating states ensure that transfer of materials do not contribute to the development or enhancement of military capabilities.

India is not a member of the Wassenaar Arrangement, but hopes to be one soon. The United States is likely to support India’s bid.

The Australia Group is an informal forum of countries that seeks to ensure that exports do not contribute to the development of chemical or biological weapons. It was established in 1985 and presently has 42 members.

1 thought on “India and the NSG”