What are Hydrofluorocarbons (HFCs)?

HFCs: Will not cause ozone layer depletion, but will cause global warming!

Though HFCs are not as harmful as CFCs for ozone layer depletion, they have a thousand times more potential to cause global warming effect than commonly known greenhouse gases like carbon Dioxide, methane etc.

Why is Kigali Agreement significant?

Implications of Kigali Agreement on India

Indian industries using HFCs like Air-Conditioning industry, Automobiles, and refrigeration industry have some serious implications on financial and technical fronts:

What next, after HFCs? 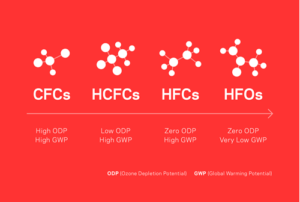 HFO-1234yf has physical properties similar to HFC-134a. Therefore, HFO-1234yf has the potential to be used in current HFC-134a systems with minimal system modifications.

What are the main characteristics of HFO-1234yf?