Concerns about the Bill

Other changes required in RTE

2. Scaled-up solutions for a future of water scarcity

The scale of loss

3. Cabinet clears Bill to restore the provisions of SC/ST Act

The Centre has decided to introduce a Bill to restore the original provisions of the Scheduled Castes and the Scheduled Tribes (Prevention of Atrocities) Act, 1989, which the Supreme Court had struck down in a March ruling. 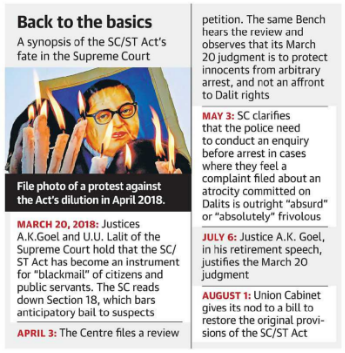 The Amendment Bill to be presented in the on-going session of Parliament seeks to insert three new clauses after Section 18 of the original Act.

The decision comes after facing a severe pressure from Dalit leaders within the ruling alliance and the opposition.

Referring to how the offence of adultery in the Indian Penal Code treats a woman as a “chattel” or property of her husband, the Supreme Court questioned whether adultery should be viewed as a crime at all if it amounts to violation of the right of equality of a woman. It is sought to quash the provisions on the ground that it is not gender neutral and violative of the fundamental right to privacy.

What is the problem with the law?

Provisions of the bill:

The move is appreciated as it is opined that good governance is a part of good economy and it imperative to bring about such legislations as India is becoming one of the topmost economies of the world with largest number of FDI coming to India. The measures like encouraging arbitration, empowering the commercial courts and mediation will aid India in achieving the target of breaking into top 50 club in the ease of doing business rankings.