Strategic Importance of Bhutan for India

Even smaller than Nepal in size and population, handicapped by geographical disadvantage and an underdeveloped economy, Bhutan or Druk Yul (Land of thunder dragon) is mostly dependent on India, its southern neighbour, with which it has greater geographical and socio-cultural proximity since hoary days.

The Treaty of Punakha with Bhutan signed by British in 1910 laid the foundation of the Indo-Bhutan relationship in subsequent times. India has an open border with Bhutan. The bilateral Indian-Bhutan Group Border Management and Security has been established to collaboratively assess and secure the border between the two countries.

India has been an all-weather friend of Bhutan since the latter’s independence. It was India who supported Bhutan’s admission in the United Nations and has been with the tiny Himalayan nation since decades assisting it for having a distinct place in the global sphere.

Assured by India forits distinct identity and autonomy since India’s independence Bhutan has been in the good book of India since the very beginningthough with exceptional aberrations in bilateral relations.

A great shift in Bhutanese economy is that it is on the verge of opening up. Recently, during the question hour session of the National Assembly, which was held on February 18, 2014, the issue of “ease of doing business”in Bhutan was raised. Since 2010, preparations have been underway in Bhutan to expand and liberalize investment policies. For instance the Foreign Direct Investment (FDI) Policy and the Economic Development Policy were released; where by achieving self-reliance was identified as the key goal. In 2012, rules and regulations related to FDI were passed, which established the key criteria for doing business in Bhutan.

While the roles of key committees and respective power of the department were established, coordination between different departments, infrastructure development, would be the key to facilitate and invite investment.

In early 2013, the Economist described Bhutan as fifth fastest growing economy, with a GDP growth rate of 8.5 percent. However there is an over-reliance of the economy on the hydro sector. Diversification of the economy to generate jobs which can absorb the youth of Bhutan has emerged as a single most area of concern.

Economic Cooperation between Bhutan and India

Mutually beneficial economic linkages between India and Bhutan have been an important element in the bilateral relationship. India continues to be the largest trade and development partner of Bhutan. Planned development efforts in Bhutan began in the early 1960s. The First Five Year Plan (FYP) of Bhutan was launched in 1961. Since then, India has been extending financial assistance to Bhutan’s FYPs. The 10th FYP ended in June 2013. India’s overall assistance to the 10th FYP was Rs. 3625 crores, excluding grants and concessional loans for hydropower projects, various subsidies and excise duty refund.Hydropower is one of the main pillars of bilateral cooperation. Three Hydropower projects developed with Indian assistance and which have already been completed are 1020 MW Tala Hydroelectric Project, 336 MW Chukha Hydroelectric Project, 60 MW Kurichhu Hydroelectric. Ten more projects have been agreed to. Of these three are already under construction – Punatsangchhu-I Hydro Electric Project, Punatsangchhu–II and Mangedechhu HEPs. Negotiations are underway for the remaining seven projects of Kholongchhu, Amochhu,

Wangchu and Bunakha Reservoir, Kuri Gongri, Chamkharchhu and Sankosh.GOI also provided Rs. 300 crores towards the establishment of Dungsum Cement Plant at Nganglam with a capacity to produce 1 million ton of cement every year. The project is expected to be commissioned shortly.

India is not only Bhutan’s main development partner but also its leading trade partner. The existing free trade regime between India and Bhutan was last renewed in 2006 for a period of 10 years. The India-Bhutan Trade and Commerce Agreement was first signed in 1972.

The Agreement on Trade and Commerce also provides for duty free transit of Bhutanese merchandise for trade with third countries.

Sixteen exit/entry points in India identified in the Protocol for Bhutan’s third country trade are: Jaigaon, Chamurchi, Ulta Pani, Hathisar (Gelephu), Darranga, Kolkata, Haldia, Dhubri, Raxaul, Panitanki, Changrabandh, Phulbari, Dawki, New Delhi, Chennai and Mumbai. Of these, Kolkata, Haldia, Mumbai and Chennai are the designated seaports, Dhubri is the riverine route, New Delhi, Chennai,Mumbai and Kolkata are the air routes and Raxaul is the rail route. The others are the designated road routes.

What is the recent Doklam issue? 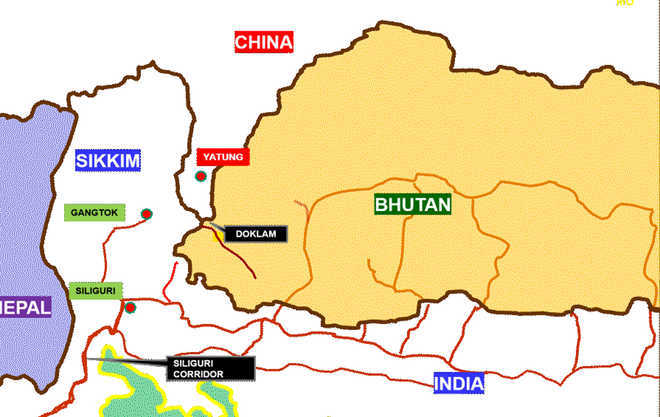 Why is Doklam so critical? 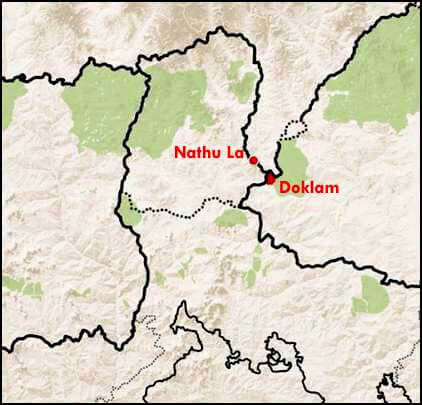 Why is India supporting Bhutan in the Doklam issue?

Chumbi valley and its significance:

Chumbi Valley is located at the tri –junction of India-China-Bhutan. The region is close to India’s Siliguri Corridor (chicken neck corridor). The Siliguri Corridor connects the rest of India with the Northeast, and Nepal with Bhutan. Chumbi Valley is also of equal strategic significance to China because of the valley’s shared border with Tibet and Sikkim. Any development in the Chumbi Valley that alters the status quo in Beijing’s favour will have serious implications for India. It is to be noted that China wants to widen the Chumbi valley by claiming areas in the west and north of Bhutan. History of Bhutan-China border dispute starts from 1950 and bilateral talks to resolve the issue started from 1984. In the event of a war, China could seek to cut off the Siliguri corridor.

It is also contested by some scholars that Chumbi valley has restricted deployment space. They further state that there is no other place in India’s northern borders which has severe limitation for military maneuvers as the Chumbi valley has.