Despite India’s geographical proximity to South-East Asia, sharing over 1,600 km of land boundary with Myanmar and maritime boundaries with Myanmar, Thailand and Indonesia, South-East Asia was hardly a priority area in Indian foreign policy before the 1990s. Initiated in the early part of the 1990s, India’s ‘Look East’ policy has been directed to the region through the Association of Southeast Asian Nations (ASEAN).

Though it is claimed that the Look East policy encompasses the entire Asia-Pacific region, its primary focus was undoubtedly on South-East Asia during the first phase of this policy that lasted until recently. It appears that during the second phase, India, apart from consolidating its relations with South-East Asia, is looking beyond at the larger Asia-Pacific region.

ASEAN members were, anyway, initially lukewarm to any idea of India’s membership in the regional association for individual reasons:

Changes in the Discourses 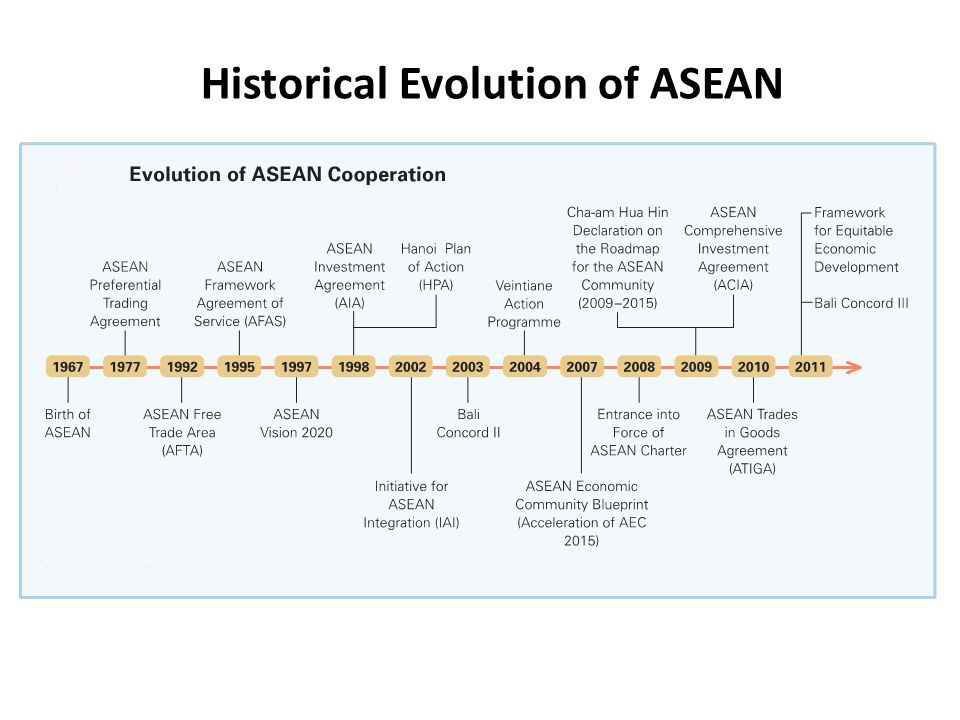 To achieve “the ASEAN way”, Treaty of Amity and Cooperation in Southeast Asia (TAC) was signed.

It provides the guiding principles of ASEAN

Timeline: Growth of ASEAN since 90s

Similar to European Union, ASEAN community is a dream with three pillars

This old article at The Diplomat analyses the importance (or lack of it) of such initiatives. The important paragraphs are reproduced here:

The ASEAN Leaders have declared that the 2009-2015 Road Map consisting of the three Community Blueprints – Economic (AEC), Political-Security (APSC), Socio-Cultural (ASCC) -shall form the basis of the overall ASEAN Community (AC15). Of course, the ASEAN Charter and other subsequent key initiatives would also define the AC15. By focusing on the broader goals, objectives, strategies, and targets set in these instruments, the contours and key markers of the AC15 can be easily framed, both in quantitative and qualitative terms as appropriate.

The fact that ASEAN has been a relatively peaceful region compared to the rest of the world should score high for APSC. The Preah Vihear Temple, Sipadan and Ligitan Islands, Pedra Branca, and even development issues such as the Malayan Railway Land deal between Malaysia and Singapore have shown the States’ maturity in using bilateral, regional and international mechanisms to resolve disputes amicably while accepting the verdicts gracefully.

Such multiple channels of dispute settlement should be pursued concurrently for the South China Sea disputes.

ASEAN has also been affected by terrorism and transnational crimes.Ensuring a drug-free ASEAN by 2015, on hindsight, is way off the mark, but with recent record-breaking seizure of illegal drugs, coordinated enforcement, and severe penalties we should be moving steadily towards that goal. The ASEAN Intergovernmental Commission on Human Rights is already operational, and more needs to be done on human rights protection.

2003: India accedes to the Treaty of Amity and Cooperation in Southeast Asia at Bali summit

2008: India-ASEAN agree to negotiate pact on investment and services, Aug 28

Kerala raised issues with PM Modi on this:

Before the agreement was signed, the Chief Minister of Kerala, V.S. Achuthanandan, led a delegation to the Indian Prime Minister protesting against the FTA:

Q.1) Evaluate the economic and strategic dimensions of India’s Look East Policy in the context of the post-Cold War international scenario. (2016 Mains)

Q.2) With respect to the South China sea, maritime territorial disputes and rising tension affirm the need for safeguarding maritime security to ensure freedom of navigation and over flight throughout the region. In this context, discuss the bilateral issues between India and China. (2014 Mains)

– economic recession and balanced of payment crisis in mid 1991 in India due to Gulf war which was mainly because of Geopolitical tension.

-China’s economic reform( shift from communisim to market socialism ) prompted India to reach out to south east asia to avoid falling into a subordinate political and economic role in the region.

-India’s desire to stabilize north eastern states where insurgency were picking up it pace.

– to balance China’s influence in this region

-diplomatic engagement with southeast to border security and defence ties.

· India has entered into a number of pacts, agreements and FTAs with nations of ASEAN but its record for implementation of such accords has been poor.

· India lags behind China and Japan in almost all spheres of Pan East Asian cooperation, East Asian observers reckon that India has so far appeared less proactive than China on some critical issues.

· Some analysts feel that India’s Look East Policy lacks a strategic vision despite seeking defense cooperation with some ASEAN nations (Myanmar, Indonesia and Vietnam) and securing a role for joint patrolling in the Malacca Straits. India does not take an assertive role perhaps due to it limited military capability

-it focus on ASIA PACIFIC region.

this is not just a re-branding rather it carried a significant message with it that India is willing to play a more active and prominent strategic role, exemplified by enhanced defense diplomacy in east and south east Asia.

The North East is key for India’s ties with ASEAN:

Connectivity through tri-lateral highway: The importance of the North-East India

It is essential to focus on development and connectivity in India’s North-East itself
How?

What about sea connectivity?

Recent development projects in the NE

Japan as a major partner