What is genetic modification (GM) of crops and how is it done?

GM is a technology that involves inserting DNA into the genome of an organism. To produce a GM plant, new DNA is transferred into plant cells. Usually, the cells are then grown in tissue culture where they develop into plants. The seeds produced by these plants will inherit the new DNA.

The characteristics of all living organisms are determined by their genetic makeup and its interaction with the environment. The genetic makeup of an organism is its genome, which in all plants and animals is made of DNA. The genome contains genes, regions of DNA that usually carry the instructions for making proteins. It is these proteins that give the plant its characteristics. For example, the colour of flowers is determined by genes that carry the instructions for making proteins involved in producing the pigments that colour petals.

Genetic modification of plants involves adding a specific stretch of DNA into the plant’s genome, giving it new or different characteristics. This could include changing the way the plant grows, or making it resistant to a particular disease. The new DNA becomes part of the GM plant’s genome which the seeds produced by these plants will contain.

The first stage in making a GM plant requires transfer of DNA into a plant cell. One of the methods used to transfer DNA is to coat the surface of small metal particles with the relevant DNA fragment, and bombard the particles into the plant cells.

Another method is to use a bacterium or virus. There are many viruses and bacteria that transfer their DNA into a host cell as a normal part of their life cycle. For GM plants, the bacterium most frequently used is called Agrobacterium tumefaciens.

The key concerns can be summarized in the below questions.

One of the major issues with the GM crops is that the biotech companies (despite a global moratorium via UN Convention on Biological Diversity) can resort to the Genetic Use Restriction Technology (GURT) and produce the terminator seeds which makes crops die off after one harvest without producing offspring. This would force the farmers to buy new seeds for each planting, which reduces their self-sufficiency and makes them dependent on major seed and chemical companies.

India has the world’s 5th largest GM crop acreage. The world order is – USA, Brazil, Argentina, Canada India. If that’s not interesting enough, then let me add another fact on this – this rank is largely on the strength of Bt cotton, the only genetically modified crop allowed in the country.

At present, 96% of India’s cotton cultivation area is under Bt cotton crops.

And that’s not just it. After the introduction of Bt cotton in 2002, India’s cotton imports fell, exports grew and as of 2015-16 India is expected to have overtaken China as the biggest cotton producer it the world.

Bt cotton (cash crop) and its introduction in India

Bt cotton was the first genetically modified crop to be approved for cultivation in India in 2002, with the introduction of Monsanto’s GM cotton seeds.

Bt stands for Bacillus thuringiensis, a bacterium that produces toxins harmful to a variety of insects, including bollworms that attack cotton. Bt cotton was created by introducing genes from the bacterium into the cotton seed, creating a crop resistant to this pest. We read the 96% dominance on cotton production and a significant reduction in insecticide use over time.

In our country, the GM crops are regulated under the following:

All transgenic crops in India require environmental clearance under 1989 “Rules for Manufacture, Use, Import, Export and storage of hazardous microorganisms/Genetically Engineered Organisms or Cells” notified under the Environment (Protection) Act, 1986.

A Genetic Engineering Approval Committee (GEAC) was established in 1989, as apex body for this matter.

In 1989, some Biosafety regulatory frameworks were issued by the MOEF which covered areas of research as well as large scale applications of GMOs and hazardous microorganisms which may not be genetically modified. <this is an important point>

Presently there are 6 committees under the rules of 1989. The mandate of the six Committees notified under Rules 1989 is as follows:

A. Genetic Engineering “Appraisal” Committee (GEAC) – [Apex Body] For approval of activities involving large scale use of hazardous microorganisms and recom­binants in research and industrial production from the environ­mental angle.

Also responsible for ap­proval of proposals relating to release of genetically engineered organisms and products into the environment including experimen­tal field trials.

D. Recombinant DNA Advisory Committee (RDAC) – The functions are of an advisory nature and involve review of developments in biotechnology at national and international levels

National Biological Diversity Act 2002 has provisions to deal with the possible risks associated with the application of modern biotechnology. The apex body constituted under this act is National Biodiversity Authority (NBA).

The NBA is Autonomous body and that performs facilitative, regulatory and advisory function for Government of India on issue of Conservation, sustainable use of biological resource and fair equitable sharing of benefits of use.

But the complexities of this legal framework went for a toss in 1998 when Maharashtra Hybrid Seeds Company Ltd. (Mahyco) started field trials of Bt Cotton in nine states and no one exactly knew which authority allowed it to do so.

Anyway, back in 2002 – with growing yield of cotton in field trials and little evidence to prove any far reaching disadvantages on the environmental scale, Bt cotton’s commercialisation was approved. Four to five years later, activists filed a PIL against GM crops in the Supreme Court and the whole controversy around side effects of Bt cotton started.

The side effects of Bt Cotton

–  The seeds are more expensive than local, non-genetically modified varieties

–  The diffusion of illegal Bt hybrids that hadn’t been cleared for biosafety standards, leading to fears of environmental toxicity. There were more than 1000 varieties of cotton hybrids and uninformed and vague choices on the part of the farmers led to stagnant production these Bt hybrids were unsuitable for rain-fed cotton lands.

–  There were issues around the actual efficacy of the Bollgard seeds with reports of bollworm infestations even in Bt cotton crops. In reality, this could just be a case of misplaced analysis. The Bt cotton is resistant only towards one type of cotton pest but leaves the plant open to other kinds.

Not all is wrong with Bt Cotton. There is a major issue of Late Maturing Hybrids

In India, Cotton is an important rainfed crop. Most of the Bt hybrids are of 180-to 200-day duration and are not suitable for rain-fed conditions. Since the Hybrid seeds are costly, they are sown late, only when the farmers ensured that there is adequate soil moisture. The boll formation in the late sown maturing hybrids suffers from severe moisture stress because it takes place much later after the rains recede. This ultimately results in low yields.

Instead, the advantage with straight varieties would have been that farmers can reuse farm-saved seeds and can take the liberty of early dry sowing, even before the onset of the monsoon, without having to worry about the risks of poor germination and re-sowing. Then, many of these hybrids are susceptible to sap-sucking insects, leaf-curl virus and leaf reddening, adding to input costs.

In 2010, Environment Ministry imposed a moratorium on the release of the transgenic brinjal hybrid. The stakes were high this time. Brinjal was a food crop and cotton (which got approved in 2002) was a cash crop.

The reasons behind the moratorium were –

Companies/ people should not think they are coming for automatic approvals. They take it for granted…They must remember that we have a right to reject it as well.

In 2010, Genetic Engineering Approvals Committee (GEAC), which had recommended approval of Bt brinjal had a name change — with “Approvals” changed to “Appraisal”.

Criticisms on the ban:

The environment ministry’s temporary but open-ended moratorium had no basis in global scientific consensus. It drew from the playbook of the anti-GM non-governmental organisations (NGOs) that have created a parallel world of science of their own. (source)

The ban also ignored the tests. These were carried out according to best international standards by not only the seed company, but also by Indian Council of Agricultural Research (ICAR) laboratories over eight years.

One reason proffered for the ban was that a multinational companies would have a monopoly over the seeds—a generic complaint against all GM crops and one that is fallacious.

Why are GM foods produced?

What is GM Mustard? 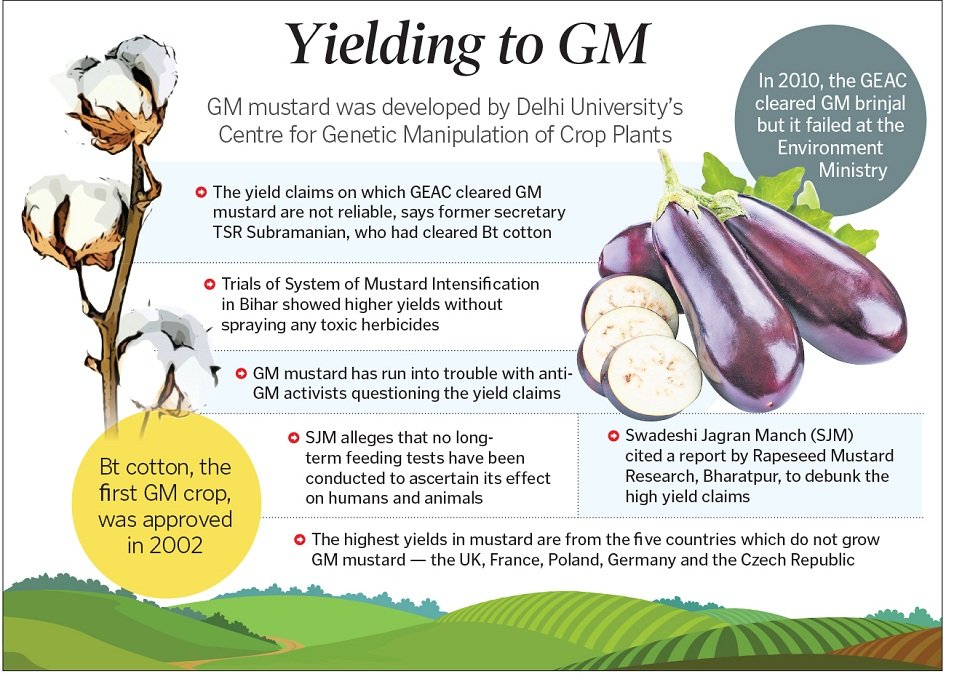 Is there a need, in the first place, for developing a mustard hybrid?

With the country’s own annual edible oil production stuck at below 7.5 million tonnes, of which mustard’s share is roughly a quarter

So, there is need to raise domestic crop yields and cut dependence on imports

Hybrid technology is a potential technique to boost yields, as has been successfully demonstrated in a host of crops

What are the environmental risks?

Are there any advantages?

This means the amount of pesticide chemicals used on the plants are reduced, so their exposure to dangerous pesticides are also reduced

Another benefit that GM technology is believed to bring about is that crops can be engineered to withstand weather extremes and fluctuations, This means that there will be good quality and sufficient yields even under a poor or severe weather condition

According to the UN Food and Agricultural Organization (FAO), some GM foods have been engineered to become more nutritious in terms of vitamin or mineral content.

Then, Why has there been so much concern about GM foods among some public interest groups, activists and consumers?

Since the first introduction on the market in the mid-1990s of a major GM food (herbicide-resistant soybeans), there has been concern about such food among activists and consumers, especially in Europe

In fact, public attention has focused on the risk side of the risk-benefit equation, often without distinguishing between potential environmental impacts and public health effects of GMOs Consumers have questioned the validity of risk assessments, both with regard to consumer health and environmental risks, focusing particulary on long-term effects

Consumer concerns have triggered a discussion on the desirability of labeling GM foods, allowing for an informed choice of consumers

What further developments can be expected in the area of GMOs?

1. Micro-propagation is the practice of multiplying plants using modern techniques like tissue culture.

2. It is used to multiply novel plants like genetically modified ones.

Which of the above statement(s) is/are correct?

#2. The Genetic Engineering Appraisal Committee is constituted under the

#3. The controversy regarding the use of Bt corn is that it

a. is potentially harmful to monarch butterflies
b. is a potential allergen to humans
c. both (a) and (b)
d. can contaminate groundwater

#4. The FAO accords the status of ‘Globally Important Agricultural Heritage Systems (GIAHS)’ to traditional agricultural systems. What is the overall goal of this initiative?

1. To provide modern technology, training in modern farming methods and financial support to local communities of identified GIAHS so as to greatly enhance their agricultural productivity

2. To identify and safeguard eco-friendly traditional farm practices and their associated landscapes, agricultural biodiversity and knowledge systems of the local communities

3. To provide Geographical Indication status to all the varieties of agricultural produce in such indentified GIAHS

Select the correct answer using the code given below.

#1. Recently genetically modified crops and seeds have been in the news. Should GM crops be allowed? Discuss with special reference to environment and biodiversity.

#2. In your opinion can cultivation of GM (Genetically Modified) crops ensure food security for India? Critically examine the arguments presented in opposition and in favour of GM technology.

#3. Critically discuss all the issues related to GM Mustard in India from the perspective of developers of the crop, government and consumers.