The Ministry of Information and Broadcasting has told the media to “refrain from using the nomenclature Dalit” and, instead, use only the Constitutional term, ‘Scheduled Caste’.

Evolution of the term ‘Dalit’:

Arguably, ‘Scheduled Caste’ is the appropriate way to refer to this class of people in official communications and documents. However, it is strange to oppose the use of the term ‘Dalit’ in the media and in non-official contexts — a nomenclature chosen and used by the community itself. Doing so lends itself to the charge that there is an attempt to deny the powerful and emotive meaning of the word Dalit. ‘Dalit’ must be recognised as an expression of self-empowerment.

With the much delayed 2+2 dialogue to take place in New Delhi on the 6th of September, there are high expectations in terms of likely signing of Communications Compatibility and Security Agreement, addressing the structural issues such as Countering America’s Adversaries Through Sanctions Act (CAATSA) etc.

What does the Presidential waiver state?

The “modified waiver authority”, or amendment to Section 231 of CAATSA proposed by Congress, allows the President to waive sanctions in certain circumstances, for six months at a time, as long as he certifies that it is in the U.S.’s national security interests and does not “endanger” ongoing operations.

India’s three-fold case for the waiver:

3. The gap in disaster management funding

Ignorance of state demands as well as DMA

Post-disaster mitigation has no specific funds

The Supreme Court on Wednesday threw out a petition seeking a ban on the Malayalam novel Meesha (Moustache), written by S. Hareesh, as it was perceived to be ‘derogatory’ to temple-going Hindu women.

The court said the creativity and imagination of an author cannot be held hostage to the vagaries of subjective perceptions, whims or fancies of individuals.

The court said it would safeguard the free flow of ideas in a democracy by quoting Voltaire’s “I may disapprove of what you say, but I will defend to the death your right to say it.”

The court said the judiciary should remain committed to keeping the flag of liberty flying high. “We live not in a totalitarian regime but in a democratic nation, which permits free exchange of ideas and liberty,” Chief Justice of India Dipak Misra, who authored the judgment, observed.

The judgment said, “A writer should have free play with words, like a painter has it with colours. The passion of imagination cannot be directed.”

It is for the reader to read a creative work with a mature spirit, catholicity of approach, objective tolerance and a sense of acceptability founded on reality, it said.

The Chief Justice, along with Justices A.M. Khanwilkar and D.Y. Chandrachud, wrote that creative voices cannot be allowed to slip into “intellectual cowardice.” 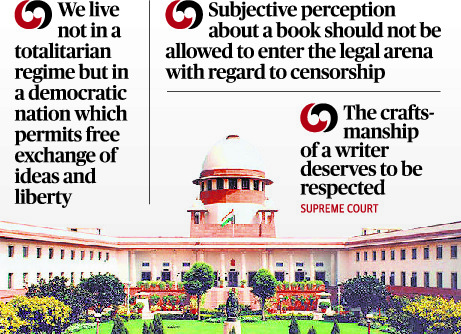 The petitioner, N. Radhakrishnan, calling himself a “proud Hindu”, alleged that the book contained “offending parts”, which insult Brahmin priests and amounts to a “casteist/racist slur”.

He contended that dialogues between certain characters in the book demeaned womanhood and treated women as “sex objects”.

The petitioner said continued publication of the book would trigger violence and create a Charlie Hebdo kind of situation.

He wanted a gag on publications which threatened gender balance and pluralism, and sought either the Supreme Court or the Information and Broadcasting Ministry to frame guidelines against such “such insensitive, incriminating and defamatory articles”.

Chief Justice Misra said, “One may have a grave dislike towards a particular manner of expression but that would not warrant issue of a mandamus from the court to ban the book or the publication.”

The court held that the language used in the dialogue cannot remotely be thought of as obscene. The concept of defamation does not arise. Nurturing the idea that it is derogatory and hurtful to the temple-going is baseless.

Details of the Compensation Plan 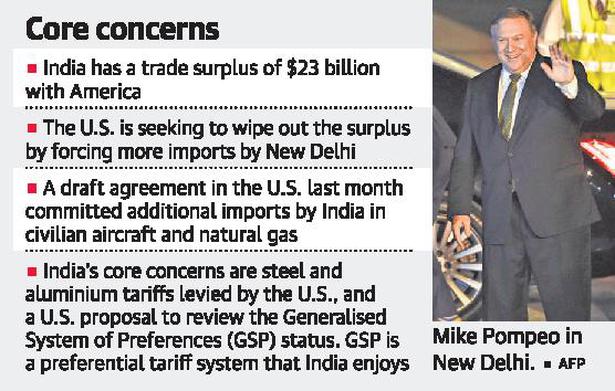 Reviewing the GSP status for India

Overt expectations by US