The Punjab Cabinet has decided to introduce in the Indian Penal Code (IPC) a new Section (295AA) which states, “Whoever causes injury, damage or sacrilege to Sri Guru Granth Sahib, Srimad Bhagwad Gita, Holy Quran and Holy Bible with the intention to hurt the religious feelings of the people, shall be punishable with imprisonment for life.”

The History of Criminal Blasphemy:

Is there a need for a new law?

Arguments FOR  the introduction of Section 295 AA:

Arguments AGAINST the introduction of Section 295AA:

History tells us that such laws and prosecutions rarely avert violence. On the other hand, they are more likely to attract violence and provide the perpetrator a justification for inflicting violence against those who are unfortunate enough to be accused of blasphemy. There is a case to read down Section 295-A and Section 153-A of the IPC that give scope to prosecute people in the name of protecting the feelings of a section of society. There is no case whatsoever to enhance jail terms.

24 years after the first AIDS Bhedbhav Virodhi Andolan petition against Section 377 in 1994, the Supreme Court in its historic judgement decriminalised a part of the Section 377 of the Indian Penal Code that criminalises consensual gay sex, invoking Articles 14, 15, 19 and 21 of the Indian Constitution. Sexuality is now spoken as dignity, as mutual respect, as equality.

Positive impacts of the judgement:

Uniqueness of the victory:

Excerpts and quotes from the judgement:

“The LGBT community has the same rights as any ordinary citizen. Respect for each other’s rights, and others are supreme humanity. Criminalising gay sex is irrational and indefensible.”

“Morality can’t be social, has to be constitutional.”

“Discrimination on the basis of sexual orientation is a violation of freedom of speech and expression.”

“Ideals of individual autonomy must be preserved.”

Chief Justice of India Dipak Misra’s opinion lays emphasis on transformative constitutionalism, that is, treating the Constitution as a dynamic document that progressively realises various rights. In particular, he invokes the doctrine of non-retrogression, which means that once a right is recognised, it cannot be reversed.

“Homosexuals have right to live with dignity.”

“Human sexuality cannot be confined to a binary.”

“What is natural and what is unnatural? Who decides these questions?”

“Section 377 inflicts tragedy and anguish; it has to be remedied.”

“We must, as a society, ask searching questions to the forms and symbols of injustice. Unless we do that, we risk becoming the cause and not just the inheritors of an unjust society.”

“History owes an apology to these people and their families. Homosexuality is part of human sexuality. They have the right of dignity and free of discrimination. Consensual sexual acts of adults are allowed for LGBT community.”

On September 26, the UN General Assembly will, for the first time, address TB in a High-Level Meeting and likely release a Political Declaration, endorsed by all member nations, to galvanise investment and action to meet the global target of eliminating TB worldwide by 2035.

The situation in India:

TB is, by and large, easily diagnosable and curable. It is unacceptable that it nevertheless remains the leading causes of death from any single infectious agent worldwide. For its elimination, which means reducing the number to one case per million people per year, would require universal, equitable access to affordable, quality TB diagnostics and treatment for anyone who needs it.

4. For a world free of chemical weapons

Having ratified the Convention, India needed to make provisions for giving effect thereto and for matters connected therewith or incidental thereto. So, India enacted a Chemical Weapons Convention Act, 2000, which is applicable to citizens of India outside India and the associates, branches or subsidiaries, outside India of companies or bodies corporate, registered or incorporated in India.

What is the Chemical Weapons Convention Act of 2000?

Definition of Chemical Weapons as per the Act:

Significant amendments to the Act:

The framework, the structure, and the laws in this convention will have to be implemented in order to get away from the menace of use of Chemical Weapons. 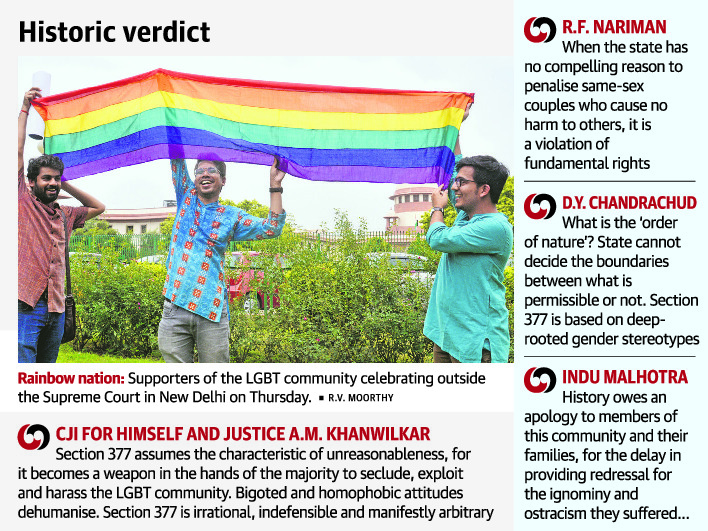 Govt. should have taken a stand on Section 377: judge

Not unique to humans, says SC

No more seen as ‘mental illness’