To understand the reluctance it is important to understand the source of that sum. For that we may need to have a peek into the balance sheet (B/S) of the Reserve Bank of India. 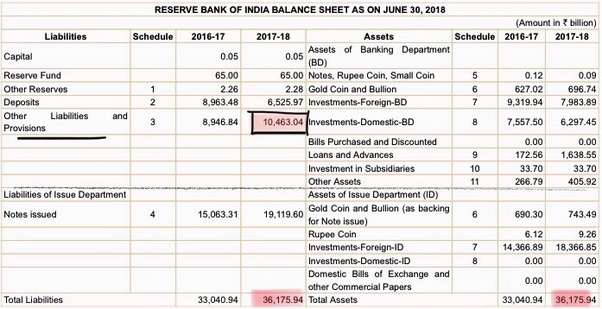 The assets are (broadly):

Currency notes are issued against some assets or in lieu of another liability (mostly the banks’ deposits).

Assets like gold and forex are Marked To Market i.e. while preparing the B/S the current market price of the asset is taken into account. This means that dollar bought at Rs. 50 five years ago will be accounted as Rs. 70 today in accordance with its market price. This also means that the asset side of B/S has expanded without really doing anything. But since balance sheets have to be balanced, there has to be some increase on the liability side to counter this auto increase on the asset side. Thus, the Reserve Bank under the ‘Other liabilities and provisions’ maintains an accounting head called the Currency and Gold Revaluation Account (CGRA). Any fluctuation in the price of gold or forex assets is mirrored in the CGRA.

The break up of the Rs. 10.4 lakh crore of ‘Other liabilities and provisions’ is as follows:

The government is of the opinion that this total provision of 10.4 lakh crore is too much and the Reserve Bank could do well to part with about 3.6 lakh crore of it.

Now, as can be understood from the above, giving away 3.6L crore would mean erosion of the contingency fund and/or the CGRA. The contingency fund, as the name suggests, is meant for a contingent situation like immediate resuscitation of a failing bank or any other unforeseen event. The CGRA, as explained earlier, is meant to absorb fluctuations in the asset prices.

The government is of the view that RBI is being too conservative as there are no major risks to the economy that calls for such (seemingly) large reserves. But as rightly put forth by Dy Governor V V Acharya, governments play T20 whereas the central bank has to play test match. While it may be true that there are no catastrophic risks to the financial system in the short/medium term, can the same be said for the next 10, 20 or 50 years? Did the world know long beforehand that the 2008 crisis was about to come?

Also, free money to the government distorts the monetary policy outlook of the central bank. The Reserve Bank of India is in charge of the money supply in the country. It has the legal mandate to keep a check on inflation, which is a direct consequence of the amount of money released in the system. Inflation is under control when money supply is managed in accordance with the growth in production of goods and services in the economy. Free money in the system goes against the central bank’s attempt to efficiently and effectively manage inflation.