The Supreme Court has sought responses from the Election Commission, the West Bengal government and others on a plea challenging the appointment of two retired bureaucrats as special observer and Central police observer in the State for the ongoing Lok Sabha election.

Who are EC’s observers?

The SC bench issued notice on the petition and posted it for hearing before a vacation bench.

The committee said that it is necessary to seek a factual and action-taken report from the joint committee before considering the matter further. The report has to be furnished within three months by email. The NTCA would be the nodal agency for compliance and coordination. For the first time, researchers have sighted nests of the grizzled giant squirrel, at Pakkamalai Reserve Forests near Gingee in the Eastern Ghats.

4. 40% of amphibian species, more than a third of all marine mammals threatened: UN report

The Global Assessment Report compiled by a UN agency from more than 1500 academic papers says that the World’s life support systems are in trouble. 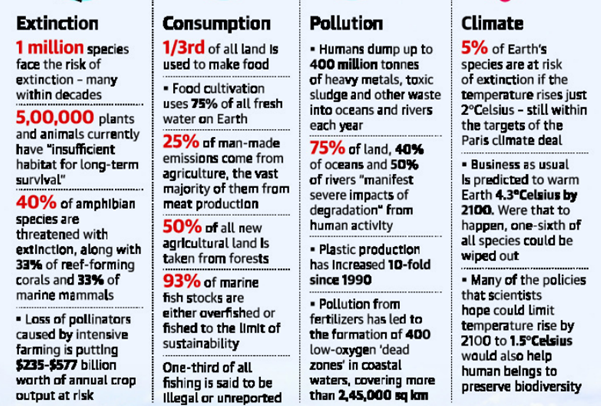 Here’s a short selection of some of the report’s notable findings:

The report also tells that it is not too late to make a difference, but only if we start now at every level from local to global. By transformative change, must be a fundamental, system-wide reorganisation across technological, economic and social factors, including paradigms, goals and values.

5. The Election Commission must act tough

Case of a trust deficit?

Prompting the EC to act:

Issue of granting clean chits to high functionaries within the ruling party:

Alleged inaction on part of the Election Commission:

Appointments and removal: A Flawed System?

S.Y. Quraishi supported the idea even when in office. However, successive ruling dispensations have ducked the issue, not wanting to let go of their power. It is obvious that political and electoral interests take precedence over national interest.