The term Vortex means a whirling mass of fluid or air, especially a whirlpool or whirlwind. It can define as “the counter-clockwise flow of air that helps keep the colder air near the Poles.” 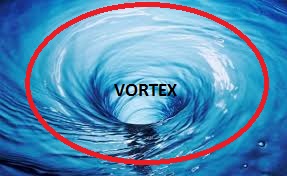 The Polar vortex is an upper-level low-pressure area lying near one of the Earth’s poles. The Earth’s atmosphere has two polar vortices which are overlying the North and South Poles. Each polar vortex is a persistent, large-scale, low-pressure zone less than 1,000 kilometres (620 miles) in diameter, that rotates counter-clockwise at the North Pole (called a cyclone) and clockwise at the South Pole, i.e., both polar vortices rotate eastward around the poles.

In other words, we can say- The extreme cold has been caused by a blast of Artic air, which in turn is a result of what is known as “Polar Vortex” event.  These cold blasts of artic air are bottled up by the strong jet stream or polar jet stream which is circulated at the high latitudes.

“Jet Stream is an upper atmospheric circulation created by the thermal variation between surface upper atmosphere and equator and poles. It is basically flows at a height of 7 to 10 kms from the surface of earth from west to east in a meander path.”

Hence, we can say that the polar jet stream is act as a gate that confines the arctic cold wind blast to the north.

Some research claims that there is no direct relation between the Polar Vortex and Indian weather but the Arctic winds are influence the various weather systems, including the western disturbance, downwards.

Let see, why there is persistent cold weather happen in north part of the Indian sub-continent. As we know that arctic cold air blast bottled up by the polar jet stream but sudden stratospheric warming events like strong high pressure ridging, intense pacific typhoons and blocking leads to the expansion of the vortex and as a result the frequency and intensity of cold weather is increasing. This is happen due to the breaking of polar jet stream which allows arctic cold air blast to expand which directly affects the global weather system and country like India faces the high frequency and intensity of western disturbances which have resulted in heavy to moderate snowfall. This can be considered as the indirect effect of Polar Vortex. 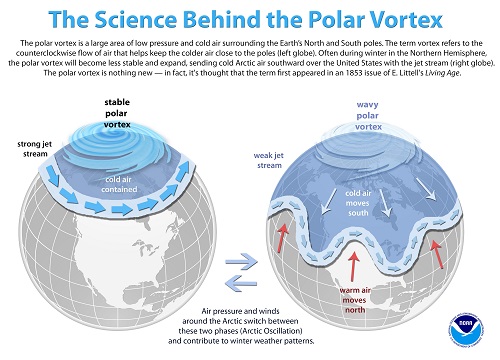 Western disturbances are low pressure winds that travel westwards from the Mediterranean region bringing cold winds which impact the northern parts of India particularly the Himalayas. The breaking of the polar vortex has resulted in warm winds entering the upper atmosphere over the Arctic resulting in a warming of the stratosphere over the North Pole which has further caused temperatures in the region increasing by tens of degrees. This could cause the cold trapped in the Arctic to spill out.

In other words, it is not actually the Polar Vortex that affects the climate of hilly states of India but weakening of the mid-latitude Westerlies due to the breaking of polar jet stream resulting in Southwest shift of Western Disturbance causing above normal snowfall and precipitation over northern India.