(1) Notwithstanding anything in this Constitution,

(a) The provisions of Article 238 shall not apply in relation to the State of Jammu and Kashmir;

(c) The provisions of Article 1 and of this article shall apply in relation to that State;

(d) such of the other provisions of this Constitution shall apply in relation to that State subject to such exceptions and modifications as the President may by order specify: Provided that no such order which relates to the matters specified in the Instrument of Accession of the State referred to in paragraph (i) of sub clause (b) shall be issued except in consultation with the Government of the State: Provided further that no such order which relates to matters other than those referred to in the last preceding proviso shall be issued except with the concurrence of that Government

(3) Notwithstanding anything in the foregoing provisions of this article, the President may, by public notification, declare that this article shall cease to be operative or shall be operative only with such exceptions and modifications and from such date as he may specify: Provided that the recommendation of the Constituent Assembly of the State referred to in clause (2) shall be necessary before the President issues such a notification

(2) It shall come into force at once, and shall thereupon supersede the Constitution (Application to Jammu and Kashmir) Order, 1954 as amended from time to time.

To article 367, there shall be added the following clause, namely:-

Has Article 370 been scrapped?

What is the status of Article 35-A?

Who Are Permanent Residents? 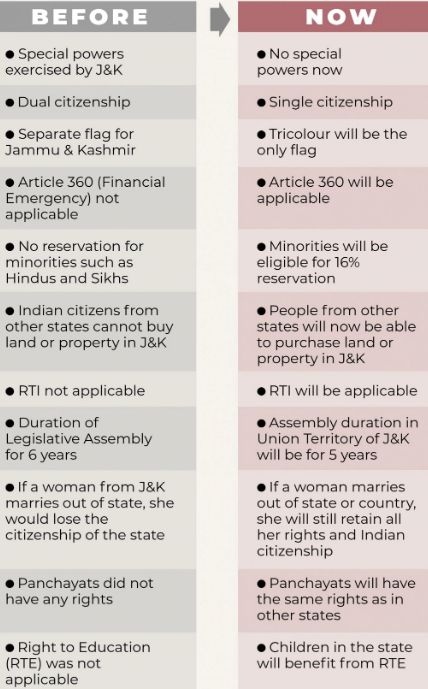 Article 3 of the Constitution

Elections in Jammu and Kashmir were delayed

Why Jammu and Kashmir is special?

It must now be followed up by a genuine outreach to the people of the state.

Article 240 of the Indian Constitution

Is it right to give a state Union territory status? Yes

The Union Territory of Jammu and Kashmir

Legislative powers of the Union Territory of Jammu and Kashmir

Role and powers of the Lieutenant Governor