Last week, while hearing a matter relating to properties of a Goan, the Supreme Court described Goa as a “shining example” with a Uniform Civil Code, observed that the founders of the Constitution had “hoped and expected” a Uniform Civil Code for India but there has been no attempt at framing one.

What is a Uniform Civil Code?

A Uniform Civil Code is one that would provide for one law for the entire country, applicable to all religious communities in their personal matters such as marriage, divorce, inheritance, adoption etc. Article 44 of the Constitution lays down that the state shall endeavour to secure a Uniform Civil Code for the citizens throughout the territory of India.

What are more important — fundamental rights or directive principles?

There is no doubt that fundamental rights are more important. The Supreme Court held in Minerva Mills (1980): “Indian Constitution is founded on the bed-rock of the balance between Parts III (Fundamental Rights) and IV (Directive Principles). To give absolute primacy to one over the other is to disturb the harmony of the Constitution”.

Article 31C inserted by the 42nd Amendment in 1976, however, lays down that if a law is made to implement any directive principle, it cannot be challenged on the ground of being violative of the fundamental rights under Articles 14 and 19.

Does India not already have a uniform code in civil matters?

Indian laws do follow a uniform code in most civil matters – Indian Contract Act, Civil Procedure Code, Sale of Goods Act, Transfer of Property Act, Partnership Act, Evidence Act etc. States, however, have made hundreds of amendments and therefore in certain matters, there is diversity even under these secular civil laws. Recently, several states refused to be governed by the uniform Motor Vehicles Act, 2019.

If the framers of the Constitution had intended to have a Uniform Civil Code, they would have given exclusive jurisdiction to Parliament in respect of personal laws, by including this subject in the Union List. But “personal laws” are mentioned in the Concurrent List. Last year, the Law Commission concluded that a Uniform Civil Code is neither feasible nor desirable.

How does the idea of a Uniform Civil Code relate to the fundamental right to religion?

How did the debate on a common code for Hindus play out?

In June 1948, Rajendra Prasad, President of the Constituent Assembly, warned Jawaharlal Nehru that to introduce “basic changes” in personal law was to impose “progressive ideas” of a “microscopic minority” on the Hindu community as a whole. Others opposed to reforms in Hindu law included Sardar Patel, Pattabhi Sitaramayya, M A Ayyangar, M M Malaviya and Kailash Nath Katju.

When the debate on the Hindu Code Bill took place in December 1949, 23 of 28 speakers opposed it. On September 15, 1951, President Prasad threatened to use his powers of returning the Bill to Parliament or vetoing it. Ambedkar eventually had to resign. Nehru agreed to trifurcation of the Code into separate Acts and diluted several provisions.

Goa is the only Indian state to have a UCC in the form of common family law. The Portuguese Civil Code that remains in force even today was introduced in the 19th century in Goa and wasn’t replaced after its liberation.

However, the code has certain drawbacks and is not strictly a uniform code. For example, Hindu men have the right to bigamy under specific circumstances mentioned in Codes of Usages and Customs of Gentile Hindus of Goa (if the wife fails to deliver a child by the age of 25, or if she fails to deliver a male child by the age of 30). For other communities, the law prohibits polygamy.

Uniform Civil Code and Arguments For & Against It

Arguments in favour of the Uniform Civil Code:

Uniform Civil Code-Challenges in its Implementation 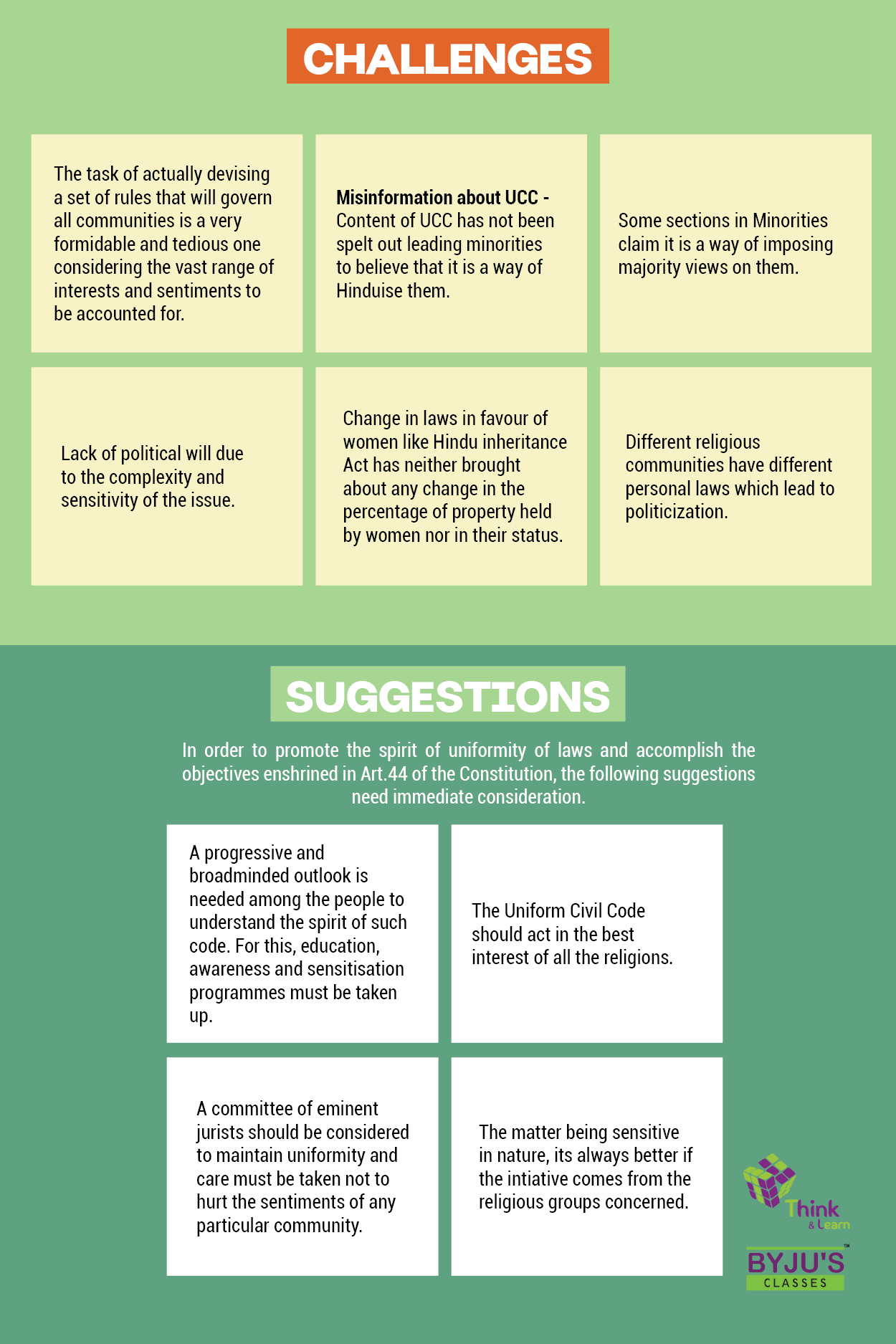 The task of actually devising a set of rules that will govern all communities is a very formidable and tedious one considering the vast range of interests and sentiments to be accounted for.

Opponents of UCC argue that personal laws are derived from religious beliefs. They maintain that it is prudent not to disturb them, as this runs the risk of engendering a great deal of animosity and tension between various religious communities. Also, India being a secular country guarantees its minorities the right to follow their own religion, culture and customs under Article 29 and 30. They argue that implementing UCC will contravene these articles.

To realize the goals of the DPSP and to maintain the uniformity of laws, the following suggestions need immediate consideration:

India has a unique blend of codified personal laws of Hindus, Muslims, Christians, Parsis. There exists no uniform family-related law in a single statute book for all Indians which is acceptable to all religious communities who co-exist in India. However, a majority of them believe that UCC is definitely desirable and would go a long way in strengthening and consolidating the Indian nationhood. The differences of opinion are on its timing and the manner in which it should be realized.

Instead of using it as an emotive issue to gain political advantage, political and intellectual leaders should try to evolve a consensus. The question is not of minority protection, or even of national unity, it is simply one of treating each human person with dignity, something which personal laws have so far failed to do.