Supreme Court dismissed of review petitions by all four convicts in the Nirbhaya rape and murder case.

Why is capital punishment not the solution?

It is clear that death penalty as a measure to end sexual violence has completely failed. In 1965, only 23 nations had abolished the death penalty. But, subsequently, criminal justice systems across the world lost confidence in this mode of punishment. Today, over two ­thirds of countries have given up on capital punishment

J.S. Verma Committee said that capital punishment is a regressive step and may not provide deterrence. The committee recommended the life sentence for the most grievous of crimes. 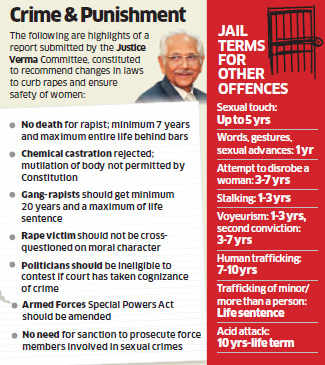 In the system of criminal justice worldwide, including in India, underpinning the element of sentencing is the ‘Theory of Punishment’.

It stipulates that there should be four elements of a systematic punishment imposed by the state:
1. the protection of society;
2. the deterrence of criminality;
3. the rehabilitation and reform of the criminal; and
4. the retributive effect for the victims and society.

Capital punishment, in its very essence, goes against the spirit of the ‘Theory of Punishment’, and by extension, natural justice.

The first element, ‘protection of society,’ is not served by imposing the death sentence any better than by incarceration. This has been proven time and again as inmates have spent decades on death row, harming no one, but being brutalised by the inhuman punishment meted out to them.

Second, there are several factors which effect criminal activity and deterrence is only one of them.

In a UN survey, it was concluded that “capital punishment deters murder to a marginally greater extent than the threat of life imprisonment.”

It is not just statistics that prove the case against deterrence, so does logic. A reasonable man is deterred not by the gravity of the sentence but by the detectability of the crime.

Third, the facet of ‘reform and rehabilitation of the criminal’ is immediately nullified by the prospect of capital punishment

This leaves only the final element — ‘the retributive effect’. Killing should never be carried out based on the primal and emotive desire among human beings for revenge. Revenge is a personalised and emotional form of retribution, which often loses sight of proportionality.

Justice P.N. Bhagwati, said that “death penalty in its actual operation is discriminatory for it strikes mostly against the poor and deprived”. The reasons include lack of adequate legal assistance to the marginalised.

Recent incidents of heinous violence perpetrated against women, it becomes imperative for the judiciary not give in to the public clamour for making capital punishment mandatory for rape convicts

There needs to be better enforcement of law in response to valid questions on justice but death penalty holds no answers.